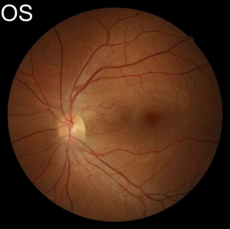 Is everything normal with your retinas? We know that when things change inside your eyes, even in the smallest detail, something is very wrong. That “something” could be in the eye itself or, just as often, in other parts of your body that may be even more important. It could be a blood pressure issue. Or diabetic damage. Or kidney disease or blood clotting disorders. There are dozens of possibilities! Not to mention the 101 abnormalities that could go wrong in the eyeball itself. So what if there was some way to detect change, even in a minute degree, so we could catch the signal that there was a problem brewing somewhere in your body?

What better way than a photograph? A 21.5 megapixel digital photograph! With our special retinal camera, we can photograph the vision cell layer inside your eyes at resolutions almost unbelievable. What that means is that every detail we photograph can be enlarged multiple times and the smallest details examined closely. We can compare a photograph from a recent visit with photos from years past, and we can know with certainty whether any given finding represents a problem or simply what might be normal for you.

We can even photograph your retinas in 3-D stereo. If you’ve ever seen a 3-D movie you can imagine how 3-D would make you feel like you’re standing right inside your eye! Talk about being part of the action! Stereo imaging is especially important in eye diseases like glaucoma, macular degeneration and some infective diseases.

For now, even if your eyes are healthy, we have begun photographing eyes in their normal state. That way, it makes it possible to catch future changes at very early stages instead of allowing things to get too far ahead of us. As you might expect, early detection of abnormalities is the surest way to fix them in a timely manner. When abnormalities aren’t allowed to get a head-start, it’s easier to head off problems. Our retinal camera gives the confidence we all want in knowing that the smallest problems will not be allowed to become large ones.

How can we help you today?

269-857-2020
eye.guy@annisoptometry.comContact Page Request an Appointment
Back

Request an Appointment
Back